There’s been a lot happening on the urban sketching scene since I last wrote. Inspired by the Oxford workshop, we have set up a small group who have met 4 times now to ‘SketchCoventry’. We are lucky to have an excellent art gallery, The Herbert, where we meet up, and it looks as if there may well be an Urban Sketchers workshop here in Coventry next April! This is timed to coincide with the exhibition Recording Britain that is touring the country and which I caught up with last year in Sheffield. It feels good to be involved in such a fascinating project, and amazing to think that it has all come about thanks to three of us pushing at some doors and finding that they opened!

We are a small group so far, but that feels fine to me. We meet up for coffee, decide where we are drawing and sometimes split into smaller groups; then we join up for lunch to look at the sketches. In the afternoon there is another foray, followed by more refreshments and more learning from each other’s drawings. It is very flexible and friendly, with ex-Oxford workshop sketchers making the effort to come from London, Shrewsbury and Banbury. 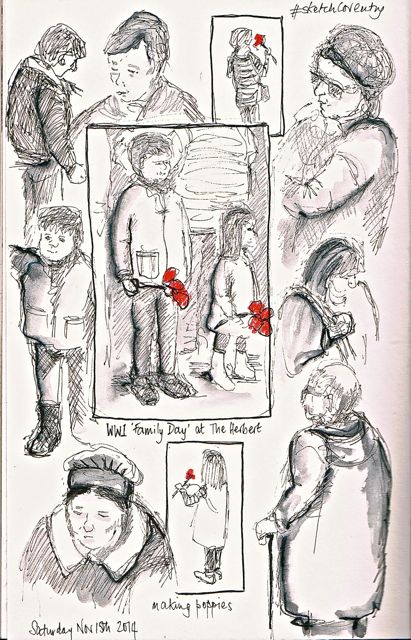 The Herbert Gallery was having a WW1 ‘family day (!) so there were lots of children clutching huge tissue paper poppies that they had made.

Sketching out in public is still a challenge, but is transformed by the group effect. I don’t feel nearly so conspicuous or vulnerable when there are two or three people drawing nearby. We give each other a sense of security and confidence; it seems that as a group we are far less likely to be interrupted or criticised than on our own. I wonder whether this is objectively the case or is something that, like a placebo, just makes us feel good.

We huddled together on the sofas in ‘Fargo Village’ to draw one of the vintage clothes stall.

The idea that there is ‘safety in numbers’ is set against a range of fears about the dangers of groups and I can see this good group/ bad group split in my therapy group too. The good version brings mutual understanding and support; the other side is the capacity to cut deep, to ignore, reject and challenge. This all reminded me of an article that I wrote for Therapy Today some time ago, and when I checked it out, this is what I found –

“Joining a group is rarely an emotionally neutral event. It holds both a promise and a threat. Depending on the sort of group, it may promise learning, companionship, support, relationship, and intimacy, for example. But it also contains a threat – of isolation, humiliation, lack of autonomy, domination, dependence, and attack. The relative force of ‘promise’ or ‘threat’ is shaped by the particular nature of the group itself, and by our previous experiences of group life.”

As far as SketchCoventry goes, there is a lot of promise and very little threat. Having said that I recognise how anxious any newcomers are about the quality of their own sketches – just like I was in Oxford last summer. The possibility of humiliation feels real, even though it is far more likely to be some internal critical voice of our own than anyone in the group. This I am sure connects with our previous, probably early, experiences in groups. It’s hard to find anyone who does not have a tale of being humiliated at school, for example…. and as for the family, that’s a whole other story brewing up for the next post!

This site uses Akismet to reduce spam. Learn how your comment data is processed.