2018 has not been a good year for the blog. I’ve been caught up with writing and editing a book about psychogeography and psychotherapy, in between trying to civilise a whippet puppy – work in progress! But now, right at the end of the year, I’m not only determined to resuscitate the blog, but have become part of a threesome of aspiring printmakers.  We set ourselves the task of producing something under the heading ‘November landscape’, which was a good way to encourage us all to look more closely at our surroundings.  The outcome for me wasn’t a new print, however, but this blog. It set me thinking about clichés; in this instance, ploughed fields with winter trees on the horizon. I’d driven past just such a scene and in the early morning light it was beautiful. Then, perhaps foolishly, I googled ‘linocut ploughed field’ and discovered what a popular subject matter it was! In fact there were some very good images of exactly the scene that I had in mind.

Then I thought about some of the other clichéd images – chickens, crows and ravens, foxes, boxing hares, sunsets, teasels, poppy heads, etc. etc. Was the only way out of the cliché trap to search for something original, or move towards abstraction? On the other hand, I have spent many years asking ‘why’ before devising a solution; why change the habit of a lifetime, to quote another cliché.

Why was there this problem? What was it about ploughed fields in winter, for example, that made them so appealing – or boxing hares, or any of the other images that have been repeated so often that they have become fashionable and commercial? And why did I resist joining in?

All the visual clichés I thought about were related to the natural environment. Struggling to understand our place in the natural world, our relationship to landscape and animals, is a constant and enduring thread in human life, even though it has been battered and distorted by industrialisation, capitalism, globalisation, and greed in general. This very human endeavour, to discover and acknowledge our own natural heritage, is perhaps part of what draws us to images of hares and crows, foxes and chickens. I wonder if I’d been born in another part of the world whether I’d have the same fascination for these particular images – or whether it would be the kangaroo or the leopard that had the magic attraction? We intuitively are drawn towards the land and the wildlife that inhabits it, I think.

But what about those clichés not related to the natural world – cars for example? Teapots, watering cans, beach huts, wine bottles – the list seems endless. What is it that draws artists to these subjects? Is it a shorthand for a particular lifestyle; the connection between possessions and personal power; the desire for acceptance; money? For once a subject has become an accepted, coded form of desirability, like a car, then reproducing that brings commercial success. The images become taken over and hollowed out as they turn into consumerist slogans.

What about our very own personalised clichés? I’m thinking about those habitual thoughts that swim around our mind. Some of them are stereotypes, as in ‘women are more emotional than men’ that are shared amongst large numbers of people. Some feel far more personal, as in ‘ if I don’t do it, nobody will’, or ‘whenever I get close to someone, they let me down’, but are also shared by lots of others; some seem even more idiosyncratic and only you will know what I’m talking about!

In psychotherapy groups, the common one, held by so many people, was “I don’t fit in. I’m the odd one out.” Each group I worked with was more or less entirely composed of people who gradually revealed their firm belief that they were the odd one out in the group. Where were these others who were ‘in’, we wondered, when we were able to talk about this.

I don’t have a problem with the idea that there is very little that is new; that we are continually searching for, finding, losing, refinding and refining images, ideas, and skills that have been current for generations. But there is something alive that gets lost in the cliché or the stereotype. We stop paying attention, glibly skating over whatever it was that was struggling to be heard. Behind every assertion of ‘being the odd one out’, for example, lay a detailed, complex history with its own unique trajectory. Perhaps behind the image of the boxing hare or the ploughed field there once lay another nuanced and personal response to the scene that has been stripped away by casual repetition and commercial exploitation.

I noticed in my online search that every now and then I came across an image that made me pause. It was not usually the ones that were detailed and ‘accurate’ representations of the subject, but those few that to my mind and eye had caught something of the character or nature of the crow, for example. It made me think of Gerard Manley Hopkins’  inscape – where something concealed had been revealed. I used to be part of a portrait drawing class, and there were rare occasions where someone’s drawing seemed to have discovered the person that we were trying to draw. I suppose this is in itself another cliché, that this is how we identify true ‘art’.  When is a cliché a truism?

To conclude, I’d like to re-introduce you to ‘Neville’, my first attempt at a Japanese style woodcut. Yes, you could call him a cliché, but despite this I have become attached to him. In my eyes, he has personality – something about him that makes him stand out from the crowd, or flock. It might of course be a sort of ‘parental’ delusion – all my children/artworks are unique and special.  What do you think?

What does home mean to you?

We wrote this in the middle of a large blank sheet of paper, expecting that there would be few if any people who might answer the question.

“Home is where the heart is’, I added on a sticky note, just for encouragement.

So began the end of the Home project that  Jo Roberts  and I have been working on for some months. To draw it to a conclusion we had decided  (Jo’s idea) to offer to talk about what we had been doing and display the work that had been created along the way. This was very new territory for me… a sort of road show where the talk and discussion took centre stage, and the “art” was just the backdrop.

Jo planned to talk about how her childhood home eventually became a house, and her ‘grown-up’ house turned into a home – something that involved a real life pilgrimage. We put up the work that we had produced, and failed miserably to take a decent photo!

I ‘d realised that I had been drawn to this project because I was already working on related themes, so some of the display featured completed works. There were a number questions I was asking myself and the audience: The acrylic paintings in the “leaving” series visually asked ‘what have we lost?’

The grey landscape that stirred up very conflicting responses was in part about searching – ‘what are we looking for?’

One response to this question – warmth and companionship, presented itself in the ‘woodburner’ series of sketches and prints:

Another – stillness and that which lies within – found its way into the linoprints.

Finally, ‘what do we fail to see’ was illustrated by sketches from my recent ‘urban sketching’ course in Coventry – more about that later!

All these questions, in various guises, come up again and again in any long term psychotherapy.They are fundamental recurring themes in the attempt to make sense of our lives and those around us.

Amazingly, over thirty people turned up. …some at the Althorpe Studios in Leamington, and some at Rugby Art Gallery.. and we explored a fascinating range of topics. People shared their experiences of feeling at home, whether in houses or landscapes or with loved ones, and touched upon moving memories. We discussed our attachments to places, people and things, intrusions and invasions, domestic objects, and cars!

We thought about how emotional security has become entwined with the physical home, the cultural and historical baggage around home ownership and the changing patterns brought about by the financial downturn. I particularly enjoyed the opportunity and the challenge to think more about the cultural, socioeconomic, political and historical context for the identification of house with home.

I came away with the big sheet of paper, now covered in sticky notes. Home means ….

“ where my partner is”

“where all the family come together”

‘my safe haven where people I love live”

‘my stability, a power base and ultimate comfort and joy”

‘a half forgotten place far away in time and life’

“a yearning to close the door”

“comfort, security, and a place to grow beetroots”….

These are some of Jo’s works – more on her website. 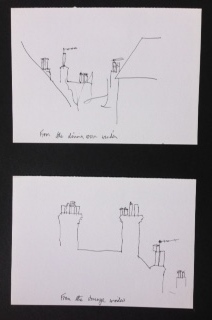