The art class has come to an end for this term, and it has finished with a collage. Some of us found it hard to shake off memories of school gluing and sticking projects, even though we were told that dried pasta was definitely not to be included! 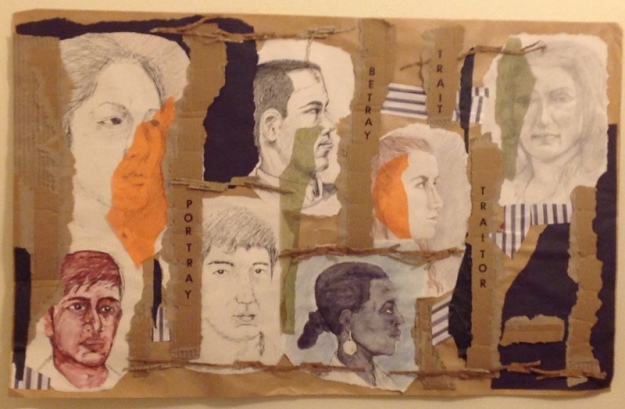 Maybe that injunction helped me into a more grown up preoccupation with language and meanings, and the relationship between portrait, portray, betray, trait and traitor[i]. I’m thinking about emotional connections rather than etymology here – the sort of links and associations that sparkle through creative conversations in the therapy room.

I thought about that apocryphal story of people in the past who feared that if they were photographed, their soul would be captured in the image. Good photographs, like good portraits, are indeed trying to capture more than a ‘likeness’, reaching towards some other dimension of the person that they see before them. Could this be a betrayal?

Portraits can be treacherous. They may reveal an unacknowledged and unwanted aspect of our appearance.  Our image of ourselves is constructed though that full frontal gaze in the mirror, where we can adjust and tweak some of the less attractive elements. My grandmother used to have one of those dressing table mirrors in three sections, so that you could see yourself in profile too . They seem to have gone out of fashion. Maybe we can only handle one version of ourselves these days, shying away from those glimpses in shop windows where the size of our nose or the double chin become so obvious.

Many portraits are designed to flatter – think of all those gloomy paintings hanging in most National Trust properties to promote the virtues of the owners and their dynasty. Great artists do something different, even when commissioned to display a success story of some particular character. I’ve been reading Andrew Graham Dixon’s book, The History of British Art, and am thinking here of Hans Holbein the Younger’s portrait of Henry 8th. Along with the grandeur, Holbein has captured the brutality and ruthlessness of the man. As Graham Dixon says, he looks like a thug.

So personality shines through. I’m not convinced that the concept of ‘personality trait’ is very useful but there is no doubt that we all have preferred and characteristic ways of negotiating relationships, and perhaps this is what can also be revealed in a good portrait.

One of the ideas that I have found helpful to work with in groups is the notion that we all carry around an image of ourselves. In our minds we have a small self-portrait that we are convinced truly represents who we are, and we behave in ways to reveal or conceal this character. Therapy groups are places where people show their self-portraits and work terribly hard to convince everyone else that these are true likenesses. What always happens is that after a while this image gets challenged. ‘That is not how we see you’, they say. ‘This image doesn’t fit with who you are, here and now. Maybe once upon a time it was accurate, but not anymore. Why are you holding on to this image of yourself?  Why do you need it?’

It is a conversation that in different forms comes up again and again for every group member, and those who work with it will in time be able to paint very different, more subtle portraits both of themselves and of others.

This site uses Akismet to reduce spam. Learn how your comment data is processed.